The wildlife of Maldives includes the flora and fauna of the islands, reefs, and the surrounding ocean. There is an amazing diversity of sealife in the Maldives archipelago, with corals and over 2,000 species of fish, ranging from colorful reef fish to reef sharks, moray eels, and a wide variety of rays: manta ray, stingray, and eagle ray. The Maldivian waters are also home for the whale shark. 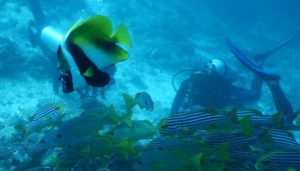 The waters around the Maldives are abundant in rare species of biological and commercial value, with tuna fisheries being traditionally one of the main commercial resources of the country, with shells. In the sea there are turtles, like the green turtle, the hawksbill turtle and the leatherback turtle, that lay eggs on Maldivian beaches. There are very few land mammals in the Maldives. Only the flying fox and a species of shrew could be said to be endemic. The Maldive reefs teem with starfish, brittle stars, and sea urchins. Sea cucumbers are now a source of income, being exported to east Asian markets. However, they were not traditionally a form of local fishery. 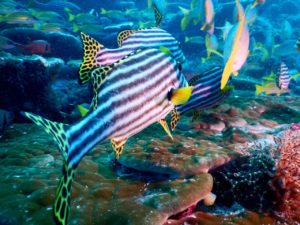