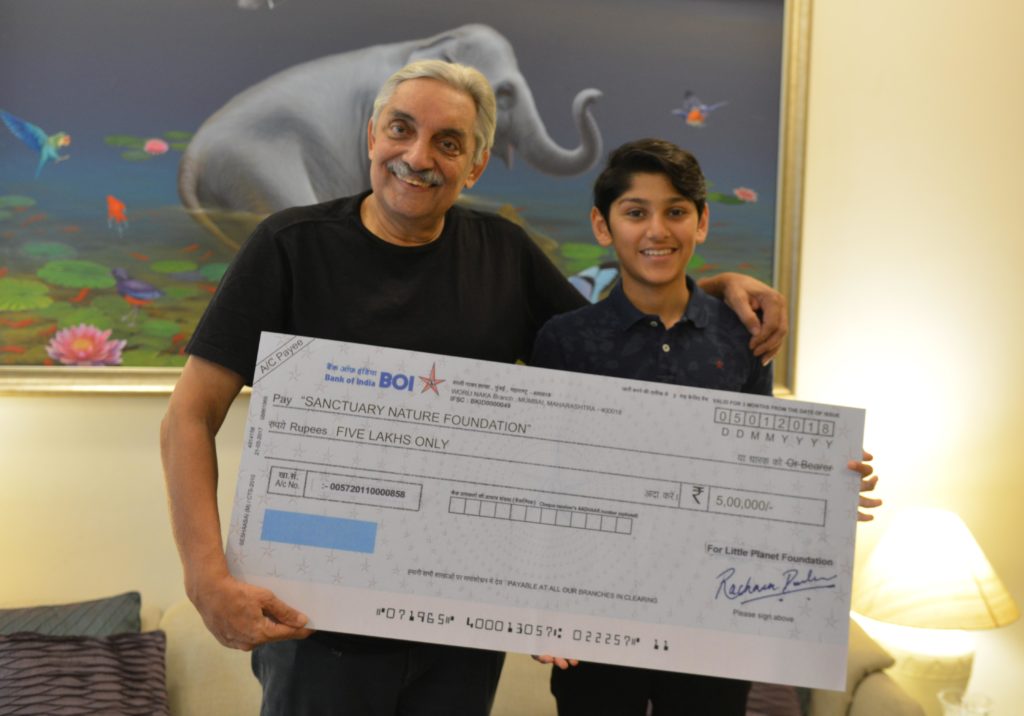 Donation to empower and support ‘Mud-on-the-boots’conservationists

In October 2017 I held my maiden photography exhibition in Mumbai. I donated around US$8000 for the project designed by Sanctuary Asia. Mr. Bittu Sahgal senior editor and environmentalist receieved this donation on behalf of Sanctuary Asia.

The Small Grants Project is a programme designed to empower and support ‘mud-on-the-boots’ conservationists in India, regardless of their academic qualifications or affiliations. Through this programme Sanctuary will enable a network of on-ground conservationists across the country, each of whom is contributing steadfastly to biodiversity conservation and community engagement in distinct and measurable ways.

The Small Grants Project will provide a fixed sum of three lakh rupees to each grantee over a period of two years. In addition to monetary support, Sanctuary will work to raise the profiles of these grassroots workers, connect them to pertinent organisations and forward their causes.

1.Urs Khan
Nominated by: Dr. Pramod Patil, Sanctuary and Whitley Award Winner
A resident of Nimba village in Rajathan’s Thar Desert, Urs Khan is an illiterate goat herd who is playing a pivotal role in the conservation of the critically endangered Great Indian Bustard. Khan leads members of a community-watchdog network that reports incidents of poaching, maintains a waterhole for desert wildlife, helps scientists track individual GIBs and speaks at local schools about conservation.

2.Sajal Madhu
Nominated by: Debadityo Sinha, Vindhyan Ecology and Natural History Foundation
In Chhattisgarh’s Raigarh district, large swathes of land have been ravaged by coal mines. In the coal-block affected area known as Dharamjaigarh, Madhu has worked relentlessly to record and mitigate human-elephant conflict. His voluntary initiative ‘Hathi Bachao Sangarsh Samiti’ has mobilized villagers to demand a protected area for wild elephants. His knowledge is profound, his efforts extraordinary.

3.Rajeev Chauhan
Nominated by: Prerna Singh Bindra, Sanctuary and Carl Zeiss Award Winner
A resident of Etawah,Uttar Pradesh, Chauhan works for the conservation of the critically endangered gharial and other wildlife that inhabit the Chambal river. Through his Society for Conservation of Nature, he monitors and protects important gharial nesting sites and sandbanks, whilst also persistently engaging in outreach programmes. Chauhan hopes to buy a boat for his work in the near future.

4.Zakhuma
Nominated by: T.R. Shankar Raman, Scientist, Nature Conservation Foundation
A temporary forest guard with the Mizoram Forest Department, Zakhuma works in the remote Dampa Tiger Reserve. Here he quietly documents and protects the unique species that inhabit this land. An excellent wildlife photographer, he has added several new species to Dampa’s bird and mammal lists. Zakhuma seeks to make a documentary on his beloved tiger reserve for conservation outreach.

5.Suni Harsana
Nominated by: Dipani Sutaria, IUCN Cetacean Specialist Group
A mere 20 km. from the city of Gurgaon in Haryana lies Mangar forest, a small but vital green lung. As a high school dropout and polio-inflicted boy, Harsana swore to protect the sacred forest of his village – Mangar Bani – and expand it. Ever since, he has worked tirelessly with lawyers, activists and villagers to document biodiversity and protect this forest. He wishes to start a nursery of indigenous plants in the near future.

6.Tsuseki and Limthure Yimchunger
Nominated by: Rita Banerji, Green Oscar Winner
Tsuseki and Limthure belong to the Yimchunger tribe and are from Fakim Village in Nagaland’s Kiphre District. The duo runs the Bhutan Eco Glory Club in the fringe villages of Fakim Wildlife Sanctuary, despite the lack of monetary support. With a focus on banning hunting, involving youth in conservation, and biodiversity documentation, they have transformed community sentiments towards conservation.

7.Anoko Mega
Nominated by: Rita Banerji, Green Oscar Winner
A resident of Roing in Arunachal Pradesh, Mishmi tribal Anoko Mega is determined to change attitudes towards hunting within his community. A driving force behind a local youth conservation group called the Abralow Memorial Multipurpose Society, he works to educate locals on the need for environmental protection, and has been documenting the immense biodiversity of the Mehao Wildlife Sanctuary.

8.Joydeb Pradhan
Nominated by: Tiasa Adhya, International Fishing Cat Working Group
Once ridiculed by neighbours for his interest in the endangered fishing cat, senior citizen Joydeb Pradhan’s conservation efforts are paying off in nine villages of West Bengal’s Howrah District. Since 2010, Pradhan has been working with scientists to collect data and with the Forest Department and Gram Panchayats to stop retaliatory killings. His work has seen the formation of four local Fishing Cat

9.S. Chandrasekaran
Nominated by: Neha Sinha, Bombay Natural History Society
A member of the Tamil Bird Network that is affiliated with the larger Indian Bird Conservation Network, Chandru is invested in protecting the nesting sites of critically endangered vulture species in the Moyar Valley, Tamil Nadu. A hobby birdwatcher turned conservationist, Chandru seeks to promote avian conservation by harnessing the skills and knowledge of forest dwellers towards wildlife protection and documentation.

10.Manoj Gogoi
Nominated by: Kedar Gore, Director, The Corbett Foundation
Subsidized by The Corbett Foundation, which was impressed with his self-motivation and dedication, Manoj is a skilled wildlife rescuer who works in and around the Kaziranga National Park, Assam. Since 2012, he has rescued and rehabilitated hundreds of wild animals, including snakes, birds and mammals. His persistence has won him the respect of locals and forest staff alike.

12.Takam Nabam
Nominated by: Nandini Velho, Sanctuary Wildlife Service Award Winner
The Chairman of the Ghora Aabhe Society that comprises elder Nyishi tribals from villages around the Pakke Tiger Reserve, Arunachal Pradesh, Takam Nabam won a Sanctuary Award in 2010 for leading community conservation initiatives. Though they are the guardians of Pakke, they struggle to raise funds to keep the society afloat and develop basic infrastructure as none in the society have more than a sixth grade education.