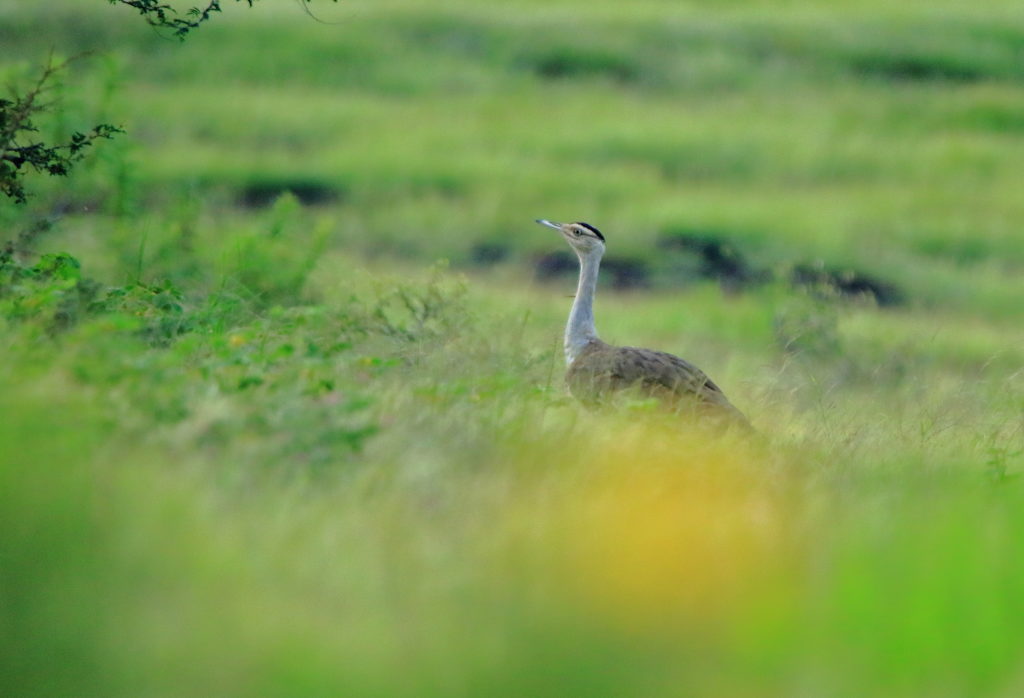 Aditya Kshirsagar
Those were the golden days at “Nannaj Wildlife Sanctuary”. As a routine, I was travelling to Great Indian Bustard [GIB] sanctuary-just 22 km from Solapur [My hometown, Solapur is southern district of Maharashtra state of India]. As a promising location to witness the Bustard, I directly went to 100-hectare plot. I had just entered the gate and I see 12 GIBs flew over my head. One can keep imagining what a delightful sighting it was!

Indeed, it was not the first time I was watching the Great Indian Bustards, but whenever I saw them, they gave pleasure and sigh of relief that they are surviving well in our ecosystem. Less rainfalls, flat lands and hot climate gives city of Solapur a privilege to accommodate vast grasslands in and around it [Gift for the GIBs]. A mix of Grasslands, water bodies and well maintained plantations by forest department attract more than 200 species of birds in Solapur. Unfortunately, Grasslands are most neglected in the ecosystem and considered as waste land.

However, one must also consider it as a place which provides home to flora and fauna which are endemic to this particular habitat and which have evolved to survive in adverse conditions like scarcity of water, hot and dry climate, etc. Mighty Great Indian Bustard is one of the bird species comfortably lives happily in the grasslands. It’s not only Nannaj which is famous sanctuary declared for Great Indian Bustard but every healthy grassland in and around city of Solapur was home for this majestic bird before.

After studying the biodiversity of Solapur for more than a decade, I have observed some interesting behavior of the GIBs. It’s in the month of April when the first few GIB males arrive in the sanctuary. They feed and live alone until June when more birds arrive to join the early males. August and September is the best time to see bustards in the Sanctuary. Bustard groups which consist of more females than males, feed with the displaying males during the breeding season. They all begin disperse in November and by December the last male leaves Nannaj.

Female lays only one egg at a time in a year that too on ground. Male and female both get involved in parental care like feeding, protecting eggs& chicks from their predators. GIBs play a vital role in controlling population of insects as it mainly feeds on them. Along with insects occasionally they feed on berries of ziziphus and the reptiles too.

Decade ago a sight over any grassland could reach horizon. But current scenario is all different. Civilization, changed patterns of agriculture, canals,renewable energy projects, quarries are eating away these beautiful grasslands. And once heaven and homely grasslands are becoming more and more disturbing. Along with that Great Indian Bustard and several species are facing serious threats like uncontrolled grazing by cattle, poaching and stray dogs.

For the first time when I participated in census of GIBs and other animals, there were 27 GIBs in sanctuary – Sadly a history now. Painfully, year by year population of GIB got reduced and it’s just a single female bird recorded last year. Now, when one has to talk about the numbers, the situation gets more serious when I say that over a decade population of the GIB has gone down by 98 percent.

Every death is taking this bird towards extinction and only around 200 birds left in the world. Taking it as alarming call, the Forest department and few of the NGOs have taken signification few steps towards the conservation program of GIB. The process of land acquisition, artificial breeding, Radio Collaring of these birds has now been accelerated since then.

Many others like me hope that we are not too late and we can see grasslands again flourishing with a lot of GIBs and other associated species which will only be possible when there will be change in perspective of people about grasslands.

(Aditya is a marine engineer, he has collected data of flora and fauna of Solapur district)